Literature / After Man: A Zoology of the Future 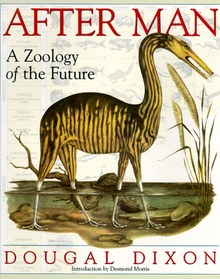 A 1981 book written by Scottish geologist Dougal Dixon, which presented his hypothesis on how the fauna and geography of Earth could change 50 million years from now. Nowadays it's very outdated in terms of biology, geology and many other sciences. It set the stage for the popular topic of Speculative Biology.

and television documentary based on it,

which, sadly, was never exported elsewhere.