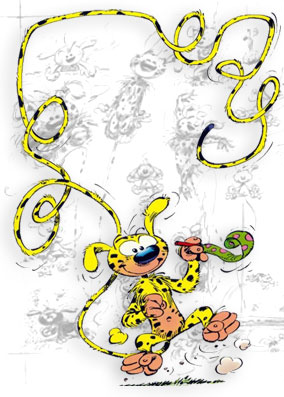 The Marsupilami is a fictional animal species starring in two Belgian comic book series that got adapted twice into an animated series. Marsupilamis are monkeylike, black-spotted yellow creatures with insanely long Prehensile Tails, from the Banana Republic of Palombia.

Marsupilamis were created by André Franquin for the Spirou and Fantasio album Spirou et les héritiers (Spirou and the Heirs) in 1956. Capturing one of these elusive and fictional critters was the goal of one the trials the title heirs were tasked to do to receive their inheritance. The captured marsupilami (nicknamed "the Marsupilami") became a Team Pet for the duration of Franquin's run, serving as Plucky Comic Relief, Big Guy and Deus ex Machina, thanks to his ever-expanding list of anatomical peculiarities. When Franquin left the series, he kept the rights to the species, and the appearances of the Marsupilami dwindled in his birth series, before finally stopping in 1970. He remains one of the most popular characters of the series.

In 1987, Franquin created his own Marsupilami comic book series, soon taken over by artist Batem (backed by numerous teams of writers, including, in the first few books, Michel Greg, the creator of Achille Talon), that is still running to this day. While readers frequently get confused, the Marsupilami seen in this series and Spirou's one aren't the same character, in spite of their being absolutely identical in appearance; a Retcon eventually showed they were twin brothers. There were two Animated Adaptations of the series, the first sticking very close to the tone and feel of the comics, and the second one bringing in a new set of human characters (who were later integrated into the comics) and adopting a slightly more angular, anime-like artstyle.

In 1992, an In Name Only Marsupilaminote While the designs of the Marsupilami and his jaguar archenemy were very similar to the comics, both were now Talking Animals having Wile E. Coyote-style adventures, hunter Bring M. Backalive was replaced with a Replacement Scrappy, and the setting was moved to the African jungle for unknown reasons. was produced by Disney, initially as a part of Raw Toonage on CBS, then becoming its own series (still on CBS) shortly afterwards.

In 2012, a Franco-Belgian live-action movie, HOUBA! On the Trail of the Marsupilami (Sur la piste du Marsupilami) starring Alain Chabat, Jamel Debbouze and Lambert Wilson was released. Loosely based on the Franquin comics, it tells the story of a French reporter and his guide, who stumble upon the legendary creature in Palombia.

In 2020, a two-part comic series by Frank Pé and Zidrou was published by Dupuis in France titled Le Marsupilami de Frank Pé et Zidrou, taking place at Belgium in 1955 and reimagined Marsupilami's start of life in Europe in Darker and Edgier way. The English translation, titled Marsupilami: The Beast, was published in 2021 by Europe Comics.

In 2021, publisher Microids and developer Ocellus Studio announced a 2.5D Platformer titled Marsupilami: Hoobadventure, in which three Marsupilamis work together to take down a ghost they accidentally released from a sarcophagus they were toying with. It'll release on November 16, 2021 for the PlayStation 4, Xbox One, Nintendo Switch, and PC via Steam with English, French, Italian, German, and Spanish language options, and North America will also get a "Tropical Edition" in retail which'll include both two sticker sheets and a door hanger along with the game.

The Marsupilami provides examples of: