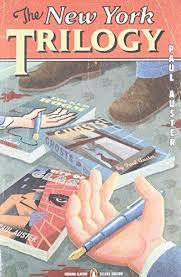 A compilation of three detective fiction novellas by Paul Auster. Well, that might be oversimplifying things a little bit. The New York Trilogy's three stories are postmodern Mind Screws based on the format of the standard detective novel and Film Noir, piling mysteries on mysteries and mystery of mystery itself.

The first novella, City of Glass, centres around author Daniel Quinn, who recieves a call in the middle of the night in his apartment, asking for the detective Paul Auster. He passes himself off as Auster and accepts the case of Peter Stillman, a damaged young man whose father locked him in a darkened room with no human contact for most of his life. As Quinn investigates the case, he loses his sense of identity as Daniel Quinn, and descends into madness. This story also includes another Paul Auster, who is a complete author avatar. This character is the one who relayed the information of the story to the unnamed 'author' referenced in the novella.

The private eye Blue, a pupil of Brown, investigates Black of Orange Street for White.

The narrator is contacted by the wife of his recently disappeared childhood friend Fanshawe, who wants him to deal with the writings that Fanshawe has left behind.