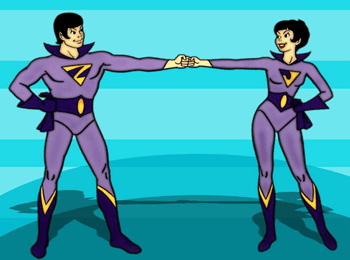 The convention in kids movies and TV shows to make the Kid Heroes a brother and sister. This way, both the sexes are represented and they can be very close, while any thought that they'll end up together is — at least theoretically — killed off immediately. These teams can also bicker a lot more than teams of friends usually do, like siblings in real life, and there's (usually) no need to worry that they might "break up".

A subtrope of Sibling Team. They may also be part of a Badass Family. A sister trope to Parent-Child Team.

After a mission on a platform goes pear-shaped, North and South work together to quickly escape.

After a mission on a platform goes pear-shaped, North and South work together to quickly escape.