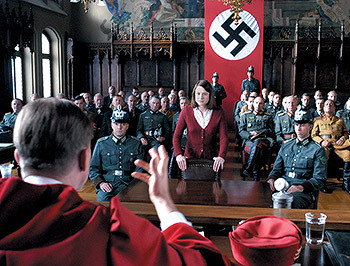 There is a slight possibility that this trial may not be entirely fair.
Advertisement:

It is based on the true story of the anti-Nazi resistance group called the "White Rose". They were active in Munich from June 1942 until February 1943, when six of their most prominent members were arrested and executed. The film depicts the arrest, interrogation, trial and ultimate execution of their most famous member, 21-year-old Sophie Scholl, along with her brother Hans and friend Christoph Probst. All of which takes a grand total of four days.

The film won three prizes at the Berlin Film Festival (including Best Actress for Julia Jentsch), and was nominated for Best Foreign Language Film at the Academy Awards.

This is not the first time that the exploits and fate of the White Rose movement have been depicted on film, but the 1982 West German production Die weiße Rose, while a hit in its country of origin, is virtually unknown to foreign audiences.