Film / To Have and Have Not 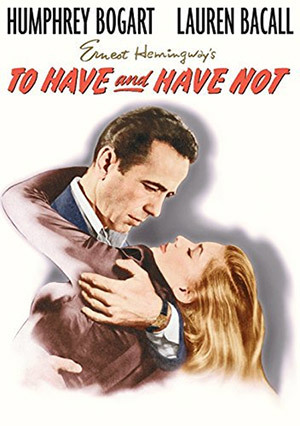 To Have and Have Not is a 1944 drama set during World War II, directed by Howard Hawks and starring Humphrey Bogart and Lauren Bacall.

Harry Morgan (Bogart) is an expatriate fishing boat captain living in Martinique, which is controlled by the French Vichy government, which of course at the time supported the Nazis. He and his alcoholic partner Eddie (Walter Brennan) take an American businessman named Johnson out fishing, and are unsuccessful, due to Johnson's poor ability. When they get back to the hotel they're staying at, Johnson promises to pay Harry the money he owes him the next morning, when he gets to go to the bank. At the hotel, the owner, Frenchy (Marcel Dalio), tells Harry some friends of his want to hire him, but knowing it's part of the resistance movement Frenchy belongs to, Harry turns him down, even when Frenchy's friends approach him. Also at the hotel, Harry ends up meeting Marie (Bacall), another expatriate, and they immediately become attracted to one another. She also ends up stealing Johnson's wallet, which is how Harry finds out Johnson actually had enough money in traveler's checks to pay him, but was planning to skip town. When Harry confronts him, Johnson sheepishly starts to sign over the traveler's checks when a shootout happens between Frenchy's friends and the police. Two of Frenchy's friends escape, but the others are killed, and Johnson is also caught in the crossfire and killed. Captain Renard (Dan Seymour), the head Gestapo in the area, brings Harry and Marie in for questioning; he's satisfied for the moment they had nothing to do with the resistance men, but insists on taking Harry's passport and his money, even the money Harry had taken from Johnson (since he died before signing the checks).

With no money, Harry reluctantly agrees to accept the job Frenchy and his friends wanted him to do, which was pick up a Resistance member from another island. Knowing he'll get the worst of it if he's caught, Harry buys Marie a plane ticket so she'll leave, and insults Eddie so he won't come along. However, they both end up disobeying him; Marie gets a job singing at the hotel, and Eddie stows away on the trip. Harry ends up picking up Paul, the Resistance member, as well as his wife Helene, but a patrol boat spots them. They end up getting away, but a sniper on the boat is able to wound Paul in the shoulder area. Harry is called on to do surgery on Paul's shoulder, and he must also outwit the Gestapo, who are asking questions about that night.

This was the first of four films to co-star Bogart and Bacall, who fell in love in real life during filming. It's also based on a novel by Ernest Hemingway, though he didn't think much of it, and actually bet Hawks he couldn't make a movie from it; William Faulkner contributed to the screenplay adaptation. It turned out to be a big hit with both critics and audiences, and is well regarded today.