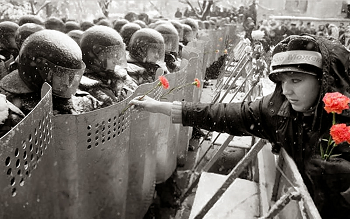 "One day we shall win freedom, but not only for ourselves. We shall so appeal to your heart and your conscience that we shall win you in the process, and our victory will be a double victory."
— Martin Luther King Jr.
Advertisement:

Tensions have been increasing for many years, and open conflict could break out at any time. Now it seems that time has come. Angry mobs pour out onto the streets. Internal security forces gather. Armies and fleets mobilize for war. It looks like this can only end badly. But what's this? The leaders of the opposing sides are calling for passive resistance? Moments ago, it looked like only a long and bloody war could possibly end the long-simmering conflict, but change comes relatively peacefully instead. Sometimes violence does occur, but instead of thousands of bodies in the streets only a few hundred are seriously injured.

A Subversion of the Final Battle, sometimes using a Deus ex Machina, and can be used as a Happy Ending. It can also be a Bittersweet Ending, as The Hero, The Mentor, a highly sympathetic Anti-Villain, etc. may be among the relatively few casualties or may sacrifice their home, fortune, dreams, etc., for peace.

What happens after can vary:

Scenario 1. It's peaceful now, but a standoff is taking place, and violence is expected. It never comes. The conflict just... ends. The sitting government and the dissents comes to a (at the very least for the most part) amicable agreement and at worst a few were trampled in the confusion.

Scenario 2. A bloody war is already underway, but a relatively bloodless internal coup, unexpected surrender, etc. resolves the conflict suddenly without too many more deaths.

Scenario 3. Violence occurs, and while it left bodies in the streets, a lengthy conflict is averted. A war that might have lasted several years, killed several percent of the population, and plunged the country into debt and bitterness for generations to come is resolved in a single campaign that kills only a (tiny) fraction of that number.

Compare Reconcile the Bitter Foes, and (in The Other Wiki) Quiet Revolution

Often used as an Ending Trope or major plot twist, so beware of spoilers!

A standoff takes place, but violence is averted

A bloody war is suddenly resolved without further casualty

Violence occurs, but a long bloody war is averted