Film / The Lives of Others 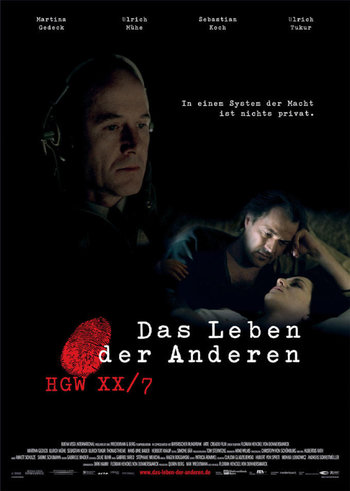 "Comrades, we must know everything."
— Stasi boss Erich Mielke, Ministry head from November 1957 to November 1989
Advertisement:

The Lives of Others (Das Leben der Anderen) is an award-winning German drama film from 2006. It is the debut film of screenwriter and director Florian Henckel von Donnersmarck.

The film takes place in 1984 in state-socialist East Germany and tells the story of Captain Gerd Wiesler (Ulrich Mühe), a stoic officer of the Secret Police, Ministerium für Staatssicherheit (also known as The Stasi). His job is to find and interrogate "enemies of socialism", people with Western sympathies or just plain wrong opinions. He is ordered by friend and superior Anton Grubitz (Ulrich Tukur) to carry out a spying operation against playwright Georg Dreyman (Sebastian Koch), whom they suspect is not what he seems. Wiesler and his men install numerous microphones in Dreyman's apartment, and his life is filled with sitting in the attic, listening in on Dreyman and his girlfriend, actress Christa-Maria Sieland (Martina Gedeck).

Eventually, Wiesler starts to warm up to the couple, noticing how empty and emotionless his own life is. He learns the real reason behind the operation, a jealous minister in love with Christa-Maria trying to get rid of his rival, and is disillusioned by his colleagues' selfish motivations. After the suicide of his director friend Albert Jerska, Dreyman decides to do something about the state's rigid censorship and writes an article about the secret suicide rates of East Germany for Western publications. Wiesler has to take more and more radical measures to protect him while Grubitz becomes increasingly suspicious of him.

The Lives of Others won seven Deutscher Filmpreis awards and the Oscar for Best Foreign Film in 2006. It has been praised for its portrayal of Stasi, its employees and its victims as human beings trapped in an unforgiving dictatorship. Although the story is widely considered narmy by actual survivors of Stasi methods (no Stasi agent has ever been publicly known to regret his actions, let alone help his victims), the film gives a very heartfelt portrayal of life in socialist East Germany.