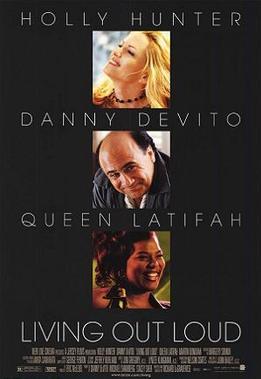 Living Out Loud is a 1998 comedy-drama film written and directed by Richard LaGravenese and set in New York City, starring Holly Hunter, Danny DeVito, Queen Latifah, Martin Donovan, and Elias Koteas. The film is based (loosely) on two short stories by Anton Chekhov.

After being unceremoniously dumped by her husband, 40-something divorcée Judith Moore (Holly Hunter) tries to make sense of her new existence. She becomes friends with Pat Francato (Danny DeVito), the elevator operator in her high-rise apartment building, who is having marital problems of his own. She also dabbles in a new romance with an attractive masseur (Eddie Cibrian), and lets loose in a nightclub ruled by a torch singer, Liz Bailey (Queen Latifah), with whom she soon connects.

Living Out Loud received mixed reviews from critics, as the film holds a 59% rating on Rotten Tomatoes based on 34 reviews.