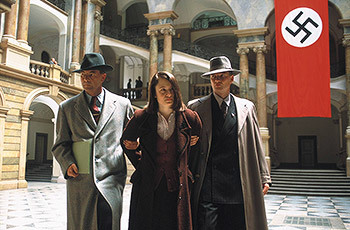 The Geheime Staatspolizei, aka the Secret State Police of Nazi Germany.

While the Abwehr was an ordinary intelligence organization whose main fault was that it was saddled with the wrong government (and to its credit was actively sabotaging Germany's war effort), the Gestapo was organized primarily to be an Official Department of Evilness. While the Abwehr was responsible to the state, the Gestapo was responsible to the Nazi Party. Thus, Adolf Hitler on the whole trusted the Gestapo more. As it turned out he may have been right to do so from his point of view, although having Hitler's trust isn't much of a compliment.

The Gestapo is one of the main points of reference we have when we think of the words Secret Police (another would be The Stasi, its communist successor in East Germany). Other such agencies existed previously, but the Gestapo made the trope famous.

The Gestapo kept people in Hitler's empire terrorized and docile. They were always trying to convince people that they were everywhere. They were in charge of hunting fugitives from the concentration camps and those who sheltered or assisted them, and fighting against La Résistance. The Gestapo was (in)famous for its fondness for Cold-Blooded Torture.

Unfortunately for the Reich, they were not as skillful at dealing with other espionage agencies as they were at sowing terror. Officers were selected for political reliability rather than professionalism. And even more than the Abwehr, they were everybody's Chew Toy. However, there were some effective agents who served here. One of them was SS-and-Police General Heinrich "Gestapo" Müller

(the only Chief of Gestapo from 1933 to 1945), who had the reputation of robotic efficiency in dealing with internal dissent. Above him as chief of all police organizations within the Reich stood Reinhard Heydrich, who was known by Hitler as "the man with an iron heart". He served for ambition rather than ideology, but served very competently until he had the misfortune of being assassinated by La Résistance in Prague. Given that he was nicknamed "The Hangman" and gave the order for the Final Solution in the Holocaust, he probably deserved it.

In general the Gestapo was a scary organization. But it was far better at frightening people than it was at waging war.

Contrary to popular belief usually fueled by incorrect portrayal of Gestapo in media (that often mix it up with the SS, especially of the Einsatzgruppen kind), Gestapo was, for the most part, a rather ineffective organization. It was permanently understaffed (in extreme cases little more than 100 officers were given jurisdiction over the area inhabited by several million citizens, while the most they ever had was one officer for every 2,000 citizens). Gestapo staff were constantly overworked with red tape and could rely only on the willingness of Germans eager to support the Nazi regime (which, frankly, usually bogged the proceedings further as officers had to separate useful information from exaggerations and blatant lies). In the occupied territories they were universally loathed and could rely only on information gained from collaborators. Historians usually agree that despite what notoriety it gained later, Gestapo was absolutely no match for the Soviet NKVD. The truly scary branch of internal and external counter-intelligence and security service had been the SD (Sicherheitsdienst Security Service within the SS), which had been created and for some time led by Heydrich himself and always driven to do the best (or, judging by what they did in Real Life, the worst).

Despite the common portrayal in media, Gestapo officers never wore sinister black, leather coats courtesy of the SS, sometimes complete with a black Commissar Cap. That's pure Hollywood invention. Until 1936 they actually didn't have any specific uniforms and were a plainclothes service. Later they were issued grey uniforms worn by all intelligence and SS administration services, but being Secret Police most Gestapo officers preferred operating in inconspicuous civilian clothes and usually tried to protect their real identity.