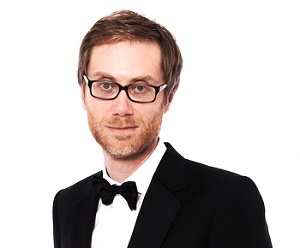 Stephen James Merchant (born in Bristol, England, on 24 November 1974) is a British actor, comedian, radio host, writer and director. He is best known for his work writing The Office (UK) and Extras with Ricky Gervais, and playing a recurring character in the latter, as well as Neil in The Good Place. He also has had a pretty successful career in voice acting, including voicing Paris in Gnomeo & Juliet, Mr. Phillips in Bromwell High, and Wheatley in Portal 2.

He is currently on a stand-up tour and starred in the HBO sitcom Hello Ladies and in 2017, Merchant made his first foray into the comic book movie genre with the release of Logan, playing the role of Caliban. He also voices the Crite President in Critters: A New Binge. He has also recently wrote and starred in the show The Outlaws.