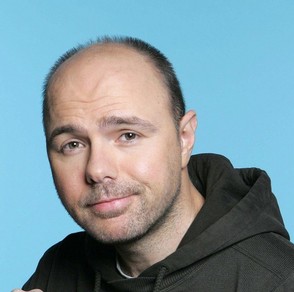 It's doin' me 'ead in.
"I've learnt that my brain isn't as interested in stuff as I am."
— Karl Pilkington
Advertisement:

Karl Pilkington (born 23 September 1972 in Manchester, England) is an English television personality, comedian, actor, author and former radio presenter/producer, best known for his work with Ricky Gervais and Stephen Merchant. He appeared on The Ricky Gervais Show where he gained prominence for his unique philosophy and outlook on life. His fame increased after appearing as the presenter of An Idiot Abroad where Ricky and Steve sent him round the world, much to his own discomfort.

It was Karl himself who best summed up his worldview: "I don't like fun". He is not a fan of holidays, parties, traveling, or anything that has to be planned in advance.