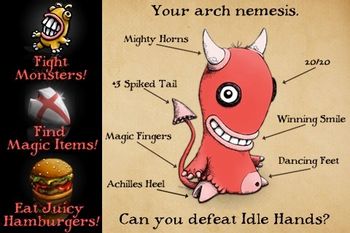 Pretty much this.
A trilogy of Role Playing Games created for the Apple Macintosh between 1995 and 1997 by Kevin Kinell.
Advertisement:

In the first game, the village of Yipe has been blocked in, and it is the hero's job to dig a way out while fighting monsters in the caves. After doing so, the final monster is revealed.

The second game introduces a larger world map, in which the first goal is to kill another monster in a cave. After doing so, the player will be told to retreive supplies from the nearby town of Maynard, which is accessed by one of two paths. Upon returning to the original town, the player finds that it has been attacked by aliens, who are residing in the western caves. This game is won upon defeating the aliens' boss.

The third game introduces several more plots, including the retreival of the King's missing stamp collection, and his daughters. Monster fighting continues as usual, but the player has a wider array of abilities, and far more regions in which to fight monsters.

In 2010, a fifth game (don't ask why there isn't a fourth) was released for the iPhone.

Tropes present in more than one of the games:

Tropes present in Quest Of Yipe I: