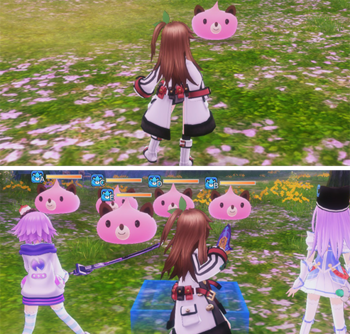 Looks like you weren't the only one to bring party members...
"Now, Guards, you stand no chance against me, 'cause I'm actually four blokes!"
— Bandit thug(s), MARDEK
Advertisement:

The enemy version of Party in My Pocket. In video games which have separate maps for movement and combat, "Preexisting Encounters" are often represented by a single creature, regardless of the number of enemies actually present in the encounter.

Like Party in My Pocket, one monster on the overworld represents a whole "party" and the player can't see the other members until the battle starts. This allows some element of surprise as, even if you know a fight is coming up, you don't know exactly what you will be up against. A particularly nasty Boss in Mook Clothing could be hiding among the enemy's party...

The one Folded Goomba suddenly becomes four, which Olivia comments on.

The one Folded Goomba suddenly becomes four, which Olivia comments on.