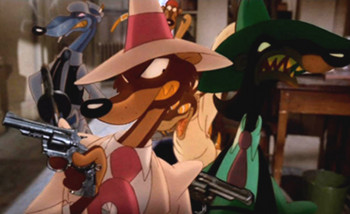 "For all of the vermin ye'd care to recall,
The weasel's the wickedest wretch of all,
An' virtuous vermin will all agree,
Any weasel is worse than me!"
— Flinky the stoat (not the same as the least weasel (the species traditionally known as simply the "weasel", but technically still a weasel in the broad sense as the Eurasian stoat is in the subfamily Mustelinae), Loamhedge
Advertisement:

Mustelids are recently becoming popular as heroic Weasel Mascot characters, but it wasn't always so. Older European works in particular portray weasels as sneaky at best and downright villainous at worst, often as the nemesis of a prey animal protagonist. As a general rule, fictional weasels are cowardly about direct confrontation, but cunning, treacherous and cruel, and sometimes downright Ax-Crazy. Such villainous portrayals might stem from weasels preying on poultry and rabbits from farms — often targeting eggs (hence a reputation as thief). They also do have a tendency to indulge in overkill; a weasel that makes it into a henhouse may get overexcited and kill more chickens than it can eat.

In real life, while they certainly are rather clever in terms of their hunting strategies, it's completely unfair to tag them as cowards; weasels are astonishingly fearless animals, being smaller than their preferred prey (rabbits) and hunting them alone. (For this reason, in many less well-known mythologies, such as the folklore of ancient Macedon and the Inuit, weasels actually symbolize wisdom and courage.) Some portrayals of malicious mustelids reflect this, portraying them as almost suicidally brave.

In addition to the least weasel (known as just the "weasel" in the UK) and the long-tailed weasel (the common species of the continental US), the related stoats and polecats get a fair amount of this. Domestic ferrets (a domestic version of the European polecat) are portrayed similarly as clever, hyperactive, slightly crazy tricksters, but are often cute and harmless rather than malicious, probably because people are increasingly likely to be familiar with them as pets. Martens and fishers are somewhat less likely to be lumped in with weasels, and otters are something completely different, as are badgers and wolverines. Skunks, formerly classified as mustelids but now given their own group Mephitidae, have their own trope; a skunk is definitely something to avoid, but is just as always as wicked as a weasel. Even in nowadays, skunks have displaced weasels in general for the villainous roles.

Mongooses are saved, ironically not by the fact that they're technically more closely related to cats and hyenas than to the weasels they resemble, but by being famous for fighting snakes. With the usual Western reflex of Reptiles Are Abhorrent, the image of a cute furry critter, which represents everything Western culture associates with good, fearlessly taking on deadly snakes equally associated with evil is irresistible, giving them a reputation as swashbuckling heroes of India. In folklore this extends to mythical creatures such as the Basilisk, in which case the weasel and its cousins may well be portrayed as heroes. Badgers on the other hand are portrayed as more vicious, aggressive, and frankly unfriendly creatures.

The stereotype of the Wicked Weasel is so strong that sneaky, evil, bloodthirsty, or sociopathic characters of other species may be compared to or called weasels, or weasel imagery used to describe them, exploiting the audience's reaction to this trope.

May lead to cases of I Am Not Weasel. See also Animal Stereotypes in general. Not to be confused with Wily Walrus. Compare with Bad Ol' Badger and Smelly Skunk.