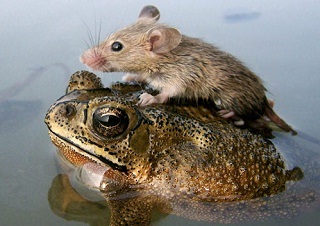 The Batrachomyomachia (Βατραχομυομαχίαnote (Frog-Mouse Battle)) is an ancient Greek epic in the tradition of Homer's Iliad and Odyssey, which tackles the grave subjects of war and revenge, as the accidental death of a prince leads the two armies into conflict.

One of the ancient "Beast Epics"note (There also existed the lost Γερανομαχία (Geranomachía), Ἀραχνομαχία (Arachnomachía), and Ψαρομαχία (Psaromachía): battles of cranes, spiders, and sparrows), the Batrachomyomachia details a day-long battle between mice and frogs as a mock epic, parodying the genre (and making Parody Older Than Feudalism). The approximately three-hundred line poem's authorship is disputed: the Romans attributed it to Homer, while Plutarch called it the work of Pigres of Halicarnassus. Some modern scholars remain unconvinced and point instead to a poet in the time of Alexander the Great. The Homer version isn't taken seriously by scholars today because the poem mentions roosters, and there weren't any in Greece until a couple of centuries later.

The mouse prince Crumb-snatchernote (Ψιχάρπαξ Psichárpax) comes to a lake for a drink when he encounters Puff-jawnote (Φυσίγναθος Physígnathos), king of the frogs. They meet cordially, and Puff-jaw offers to bear his guest across the lake to his home. In the middle of the lake, however, a watersnake appears and the panicked Puff-jaw dives for safety, leaving the hapless Crumb-snatcher to drown.

His death is witnessed by the mice and, of course, This Means War!.

And so their day-long battle is described with all the elements of the epic genre: arming scenesnote (bean-pod greaves, skin breastplates, and peanut-shell helmets for the mice; mallow-leaf greaves, beet-leaf breastplates, and snail-shell helmets for the frogs), divine participation,note Except for much of the battle the gods prefer to amuse themselves watching than help either side. character epithets, epic battle scenes, etc. A plethora of epic conventions, all used to describe warring mice and frogs. Thus in modern times, the word "batrachomyomachia" and its various translations has come to mean "a silly conflict."

in the ancient Greek; in English here

This parody contains examples of the following tropes: