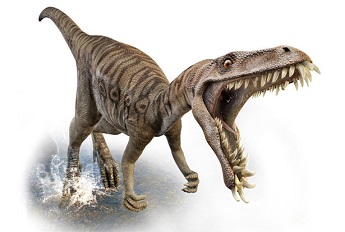 This is not a Velociraptor.note It's a Masiakasaurus, which is from a different time and continent, was likely featherless, and not closely related to Velociraptor.
Advertisement:

For dinosaurs, dinosaur-related, and other prehistoric tropes and Useful Notes. Despite the name, this index also covers non-dinosaurian prehistoric/extinct life. See also Avian Tropes, for the dinosaurs' descendants.