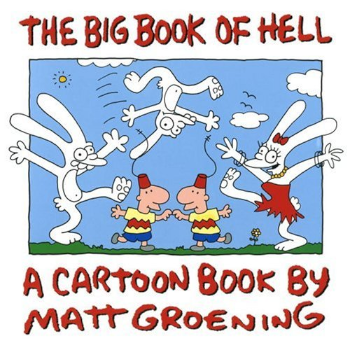 "Love is a snowmobile racing across the tundra and then suddenly it flips over, pinning you underneath. At night, the ice weasels come."
— Nietzsche, Chapter I: What is Love? (And What Makes You Think You Deserve Some?)
Advertisement:

Life in Hell started in 1977 as an Underground Comic book Groening used to describe life in Los Angeles to his friends. Groening photocopied and distributed the comic book to friends and sold it for two dollars a copy at the "punk" corner of the record store in which he worked. Life in Hell debuted as a comic strip in the avant-garde Wet magazine in 1978, to which Groening made his first professional cartoon sale.

The series focuses on the life of Binky, a bitter, depressed and thus "normal" rabbit stuck in a dead end job and a bad apartment, Sheba, his easily irked girlfriend, and Bongo, his illegitimate son. The stories follow Binky's interactions with other humanoid-animals and his misadventures as he deals with his own issues and those of the others around him.

In 1985, James L. Brooks invited Groening to pitch a set of animated shorts to be used as filler for The Tracey Ullman Show. While Groening was originally planning on pitching an Animated Adaptation of Life in Hell, he realised that would entail giving up full rights to the strip to FOX. As a result, while waiting in Brooks's lobby, he hurriedly sketched out a premise for a show about a crudely drawn Dysfunctional Family. You probably know the rest.

Matt Groening stated that he would continue the strip as long as possible, though his production was strained by work on The Simpsons and Futurama. There were also accusations that success, fame, marriage and fatherhood had all conspired to dull his edge. Meanwhile, the steady decline of alternative newsweeklies post millennium meant that the market for "underground" strips was steadily diminishing. Finally, on June 20th, 2012 with distribution down to fewer than a dozen papers Groening announced that Life in Hell would end altogether.