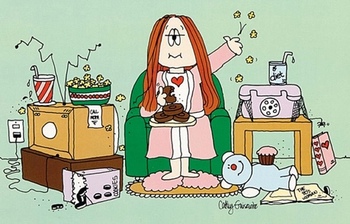 Cathy is a Newspaper Comic strip by Cathy Guisewite, which ran from 1976 to 2010. It revolves around the eponymous character's life as a single woman, her dealing with a stressful workplace, diets, junk food, being able to fit in swimwear, the dating scene, and an overbearing mother.

In the 1970s (the age of The Mary Tyler Moore Show and the E.R.A.), a comic about a single young woman trying to make a career was new and innovative. The strip was extremely popular in its heyday, with many women readers readily identifying with the title character as she dealt with common problems of modern single life. A rumor in the 1980s that she was finally going to marry her on-again, off-again boyfriend Irving sparked a lot of fan backlash from single women who didn't want to lose this character they could relate to. (Cathy finally did marry Irving in 2005, and the final strip in 2010 featured the announcement that Cathy was pregnant with a girl.)

During the COVID-19 Pandemic Guisewite would bring the character back for an on-off series of one-panel comics called Scenes from Isolation which she would share on her Instagram profile, as a way of dealing with being stuck in quarantine.