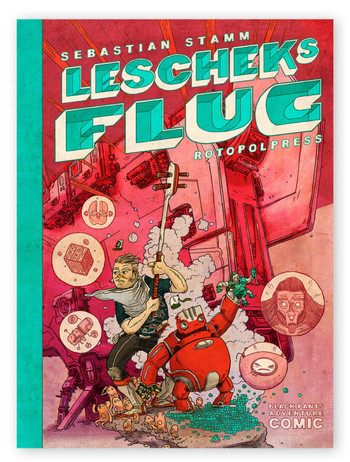 There's only one rule in space...

Leschek's Flight ("Lescheks Flug" in the original German) is an indie comic book by Sebastian Stamm, one of the co-founders of the Black Pants Game Studio.

The story is that of a robot fellow by the name of Leschek, who spends his days working a dead end job at a toy factory and dreaming about the wonders of life beyond his home on Neulins, an industrial asteroid. When one of Leschek's coworkers, Fattko, kicks the bucket, the inheritance he leaves gives Leschek a chance to make his cosmic dreams come true— but it's going to take the assistance of a human pilot, an unusually capable action figure, and an obscene amount of cubes to set himself free.

The book was originally released in German as a hardcover in 2013 by indie comic publisher Rotopolpress, and got a digital English translation two years later. You can check it out here.

...the journey has to continue.