You may be looking for Ziggy, by Tom Wilson. 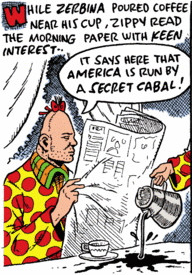 Are We Having Fun Yet?
Advertisement:

Zippy the Pinhead (or Zippy th' Pinhead or simply Zippy!) is a syndicated comic strip written by Bill Griffith. Zippy first appeared in "Real Pulp Comix" #1 (March, 1971) and went on to appear in Underground Comics, later adapted into a comic strip in 1976. In 1986, a deal between Griffith and King Features ensured much greater distribution than before.

It might be the strangest comic strip ever published in newspapers, and that's saying a lot for a medium that gave birth to Krazy Kat, The Far Side (and its various copycats), and more recently, Liō. Its drawing style, realistic and intricate and yet otherworldly, would not have been out of place in the early days of Newspaper Comics. The writing itself is a string of non sequiturs and dreamlike scenarios, with no real punchlines in the traditional sense.