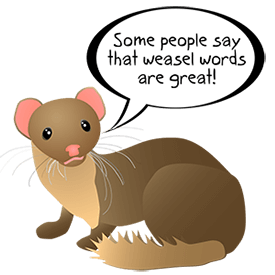 A not so Necessary Weasel!
"And you really believe all that? I can't tell when you decorate your sentences with all those hedges."
— Siobhan, Luminosity
Advertisement:

Weasel Words are about words or phrases that imply more than they actually mean. Taken at face value, they don't say much at all, or are just not impressive. However, the way they're used imply there's substance to them, that they mean something.

This is one reason they're a common feature of advertising, both on television and elsewhere: companies can imply that products or offers are better than they actually are without getting into legal trouble for lying about it. For instance, "part of this complete breakfast" doesn't mean the product itself completes the breakfast, but the implication is that it does.

For an extensive and detailed examination of Weasel Words, see this entry at Wikipedia.

Or, better yet, see this entry!

Some people say that weasel words are a necessary generalisation. TV Tropes editor Sockatume believes that if you know who's saying something, you should mention it.

Do you see what we did there?

For one form of weasel words we don't want around here, see Examples Are Not Arguable. As an interesting note the term is called that not to imply weasels are inherently evil somehow, but rather in reference to how they eat eggs by sucking the insides out and only make a small hole, meaning an egg they have sucked may appear to be intact until someone looks at it more closely, in the same way weasel words suck the meaning out of a statement without being immediately obvious.

Compare Tropes Hidden from Audience, many of which these tropes are.

It has been said that browsing TV Tropes will help you win the lottery. But honestly, you're better off investing in a good company.