Adjacent to This Complete Breakfast 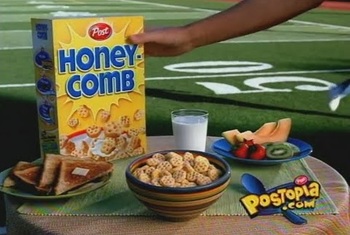 The only thing with less nutritional content on the table is the cereal box itself...unless you honestly intend to eat the silverware.
"New Cheat Commandos... O's sugar cereal is a delicious part of this complete delicious nutritious breakfast! And take some vitamins, too!"
— Homestar Runner, "Cheat Commandos...O's"
Advertisement:

Breakfast cereals aimed at kids allure their target audience with bright colors, cute cartoon mascots, and of course tons of sugar. But the parents are the ones who have to fork over the cash, and they're not going to invest $3.99 in future dental bills. So how can you, the advertiser, convince Mom that Choco Woofers are actually harmless, even beneficial, and provide the vitamins and minerals that her growing child needs?

Simple. Just set your sugar-laden product (in a nice bowl) alongside toast, bacon, eggs, cheese, pancakes, fruit, vegetables, orange juice, milk, etc., and advertise that the cereal is an essential part of this complete breakfast. After all, if Choco Woofers are right at home amidst all those other wholesome foods, they must be perfectly healthful, right?

The claim is technically a legal requirement, but, like a Stealth Cigarette Commercial, the companies have hidden the obvious beneath the implications. After all — really! — if you were sitting down to the princely spread of that complete breakfast, Choco Woofers would be furthest thing from your mind. The only time you'd want to 'complete' a breakfast with Choco Woofers would be if you'd already eaten some and were still hungry, in which case you'd just grab the box and pour another bowl.

In other words, your Choco Woofers are "part of this complete breakfast" in much the same way that chocolate cake is "part of a complete dinner": as a tasty dessert that doesn't add anything to the meal but calories.

Further complicating things, the nutrition panels on cereal boxes in the UK tend to include the vitamins and calcium from average milk on top of those present in the dry cereal by itself, but this is more reasonable. Canadian and US labels show both the pre- and post-milk values (usually skim milk).

Ironically, in the 1950s and '60s, having sugar added to a breakfast cereal was actually its selling point. You normally added your own sugar to your cereal anyway, and a pre-sweetened cereal meant you could save a step (and parents could know how much added sugar their kids were getting). note  In addition, portion sizes were smaller in the 1950s & '60s, and Baby Boomers & Generation X children typically had a more active, "free-range" lifestyle than today's children do, hence they needed more energy. By the late 1970s, sugar had become demonized, so sugary cereals took steps to downplay their sugar content: They changed their names (e.g. from Sugar Smacks to Honey Smacks, or from Sugar Frosted Flakes to just Frosted Flakes), and they started splitting the sugar into multiple types so that "sugar" no longer appeared at the top of the ingredients list (e.g. instead of being "Sugar, wheat flour, oat flour, ...", the ingredients now read "Wheat and oat flour, sugar, glucose-fructose, ...", even though the contents of the box were identical).

of this complete breakfast" — hey, what's a little grammatical error between friends?

A newer variant of this is pulled by health products, particularly diet pills and nutritional supplements, where the ad claims the product will help you lose weight and/or be healthy when used "alongside diet and exercise"; of course, it's the diet and exercise that provide most of the effect, with the pills or nutritional supplements doing little if any actual work. (And they have a necessary legal obligation of their own, in that they are "not intended to prevent, diagnose, or treat any disease".)

A Subtrope of False Cause, as correlation (a piece of fruit next to a bowl of sugary cereal) does not equal causation (the fruit and the cereal contributing equally to the nutritive content of the breakfast, so that if you took the cereal away you would lose half of the nutrition).

Compare to Overly Cool Play Space, where a toy is shown in a cool play area to make you associate the toy with the unrelated surrounding area. The name is from a Dave Barry column, as explained in the Quotes subpage.