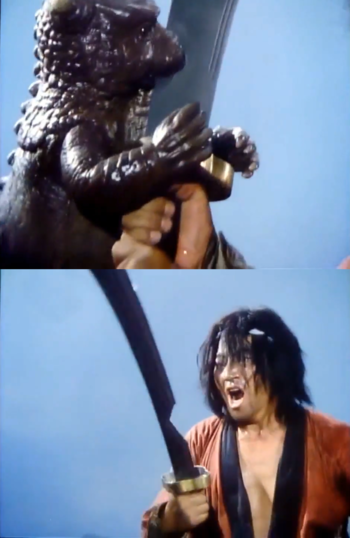 Well, that's one way to get more iron in your diet...
"Hey, big metal guy! I got food here for ya! Metal! Crunchy, delicious metal! Come and get it!"
— Hogarth Hughes, The Iron Giant
Advertisement:

One of the easiest ways to portray an organism as different from other living creatures is to give it radically different dietary needs. And one of the easiest ways to do that is to have the organism consume metal. Now, while in real life humans and other carbon-based organisms need to consume trace amounts of metals to stay healthy (for example, the iron found in green vegetables is necessary for the production of metalloproteins like hemoglobin), this trope is about creatures that consume pure, refined metal for food. So a person eating the aforementioned green vegetables would not be an example, but a monster eating a steel sword would be.

Such metal-eating creatures often present a unique threat to many of the constituent parts of human civilization compared to other entities with strange diets. After all, automobiles, I-beams, electrical wires, and computers all need metal to manufacture, so a metallivorous monster that devours such objects can throw people's lives into disarray even if the people themselves are unharmed. Heroes can also find it difficult to fight monsters that can eat their weapons and armor. At other times, however, metal-eating organisms can be beneficial to humans, such as by recycling or refining the metals through digesting and expelling them in a way that can be gathered. It's also a common diet for a Nuclear Mutant; radioactive elements such as uranium and plutonium are metals, and irradiated monsters are likely to seek out such substances for a meal. Hard science fiction likes to make these creatures Extremophile Lifeforms, though more fantastical works tend to just depict creatures that resemble those in real life aside from the metal eating.

It is common for the metal eaters to be creatures predominantly made of metal themselves, usually Chrome Champions with some kind of Sculpted Physique. It is also a common trait among robots, in lieu of them needing just electricity and factory-made replacement parts like in real life. A meal for these characters may consist of Palette-Swapped Alien Food with a metallic color and texture, oftentimes with visible seams and rivets to emphasize that it is made from metal. And sometimes, the eater is actually a human or humanlike character who chows down on metal in order to be more "macho".

Subtrope to Fantastic Diet Requirement. Sometimes an example of Extreme Omnivore, unless the character only eats metal. Extreme Omni Goats are very frequently shown eating metal; tin cans, in particular, are a staple item in their diets (though in real life, goats chomping on cans are actually trying to eat the paper labels on the cans). Metal is also a common food for Grey Goo. Compare with Eat Dirt, Cheap, which also deals with characters eating a substance that comes from the ground, and Eating Machine, where metallic robots eat the same food as organic humans. Not to be confused with Tasty Gold or Ate the Spoon, unless the characters really do eat the gold/spoon outright.