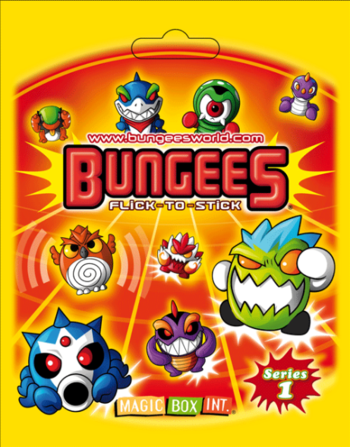 Flick-to-Stick Bungees is a collectible toy series created by Magic Box Int. of GoGo's Crazy Bones fame. The series consists of figurines made out of a rubbery plastic which have a magnet attached to the bottom, allowing them to stick to the metallic disks and cards that are packed with them and to the game boards which come with the starter packs.

There are two versions of this toy series, one made for Europe and one made for America. The European version had two sets released for it, called "Series 1" and "Bionic Bungees", both of which contain 96 characters. The latter set has a plot involving a safari crew who discover and study the Bungees. The Bungees in this version are separated into clans based on certain elements. The former set has clan leader Bungees while the latter has "wanted" Bungees instead.

The American version, distributed by Jazwares, had only one set released for it, also simply called Series 1. This set took most of the characters from Bionic Bungees and renamed and recolored them. The Bungees in this set are divided into crews of four. A short-lived webtoon was made based on this version.

Neither version of the toyline was very successful (except perhaps the European version, which managed only one set of characters beyond the original 96 in Series 1 at least), and no new releases have been seen since 2014.