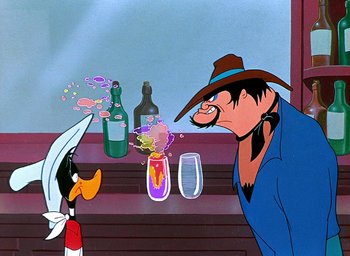 Have a drink!
"She's the flower of G-G-Gower Gulch,
A cowpuncher's sweetheart t-t-t-true.
And her looks don't amount to m-much
'Cause one of her eyes is b-b-b-blue.
She's got skin just like prairie dog leather.
She cooks nothing but ch-chuckwagon st-st-st-stew.
And her name is Minerva Ulch.
She's the flower of G-G-G-Gower Gulch."
— Porky Pig
"Drip-Along Daffy" is a 1951 Looney Tunes cartoon directed by Chuck Jones and starring Daffy Duck. Daffy is a "Western-Type Hero" who, along with his "Comedy Relief" sidekick Porky Pig, wanders into The Wild West town of "Snake-Bite Center" and resolves to clean it up and stop all the violence and mayhem. Unfortunately the residents are entirely indifferent to Daffy, and when he finally finds a villain who will pay attention to him in the form of murderous bandit and square dance caller Nasty Canasta, things do not go well.
Advertisement:

Conceived as a satire of all sorts of cliches of The Western and The Wild West. Even the backgrounds look like the Monument Valley made so familiar by John Ford films.