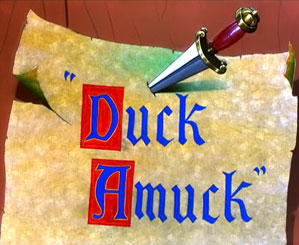 Just an average day at the office for Daffy, right?
Advertisement:

Duck Amuck is an incredibly postmodern Merrie Melodies short directed by Chuck Jones in 1953, in which Daffy Duck finds himself tormented by a sadistic animator. Seen as a large pencil or paintbrush coming into frame to make alterations, the animator screws around with the backgrounds, erases Daffy, paints him absurd colors, replaces his voice with random sound effects, redraws him as a bizarre four-legged creature, and so forth.

The short was an audacious experiment to see if animation could screw with certain recognizable characters. Could Daffy still be Daffy if every part of him (appearance, voice, environment) was taken away? Can a cartoon still be enjoyable if it has no discernible story and only exists to be a visual experiment?

The short has since come to be regarded as one of the all-time great cartoon shorts. A couple years later, Jones would direct a somewhat less successful Spiritual Sequel in Rabbit Rampage, this time with Bugs Bunny as the victim. The cartoon even spawned a game for the Nintendo DS in 2007 in which the player could take the role of the animator and torment Daffy, though Daffy would do his best to fight back.

Compare Manipulation, an award-winning 1991 animated short that uses a similar premise of an animator screwing with a cartoon character.

"Ain't I a stinker?"
Feedback

This is a Close-Up?!

This is a Close-Up?!