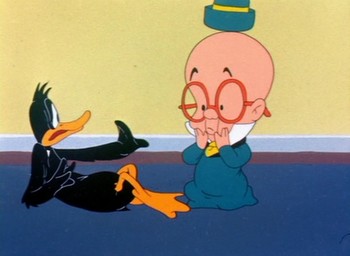 You think he’s got a chance? Well, now, I wouldn’t say that...
Advertisement:

The cartoon starts with Daffy reading the newspaper about the military making a "Smashing frontal attack on enemy rear", and is ecstatic about it. He marches around his house, singing praises about America and how he'd love to be in the military, fighting on the front lines—that is, until he receives a phone call that the "Little Man from the Draft Board" is on his way to deliver Daffy his draft notice. Initially eager, Daffy immediately gets cold feet about the idea of actually going to war, and when the little man in question arrives to give Daffy his card, the waterfowl tries everything in his power to try and evade him...