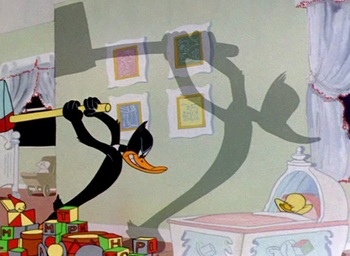 "Nasty Quacks" is a 1945 Merrie Melodies starring Daffy Duck and directed by Frank Tashlin (though because of Tashlin's departure, this cartoon is uncredited), being the final Daffy cartoon he directed.

Once upon a time, a father gave his daughter, Agnes, a cute baby black duck, and everybody was happy. Over the months, the little duckling rapidly grew up (with him telling the narration he was going too fast). Eventually, the little black duck, Daffy, became like part of the family, but his grating personality drives the father crazy to the point that he's determined to get rid of him, but due to Agnes protecting the duck, he's forced to use subtle methods. However, Daffy manages to outsmart him at every turn. Eventually, the father finally comes up with the idea to get his daughter a new baby duck, which Agnes fawns over in place of Daffy, leaving the father free to toss the duck out. Daffy attempts to get rid of the interloper, but can't bring himself to hurt a child, so he decides to feed the duckling vitamins to make it grow into a big duck that he can kill. This ends up leading to a surprising ending for everyone.