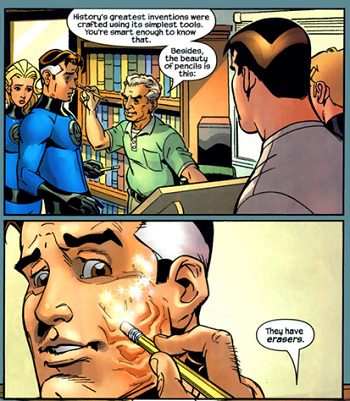 When a character is an author, or the author is a character, and they are shown interacting with the characters in their works, they are often shown to have god-like control over the world of their characters. Note that often, the characters themselves will appear to have independent wills from the author, and may even try to stop them, even though the author should be able to control them like puppets, too.

A common variant involves an artist for a comic or animation changing the character's appearance in cruel and unusual ways, drawing monsters to chase them, or even threatening to erase characters out of existence.

Compare Rewriting Reality, in which a character literally rewrites the world. See also Interactive Narrator. Often implicitly relies on The Power of Language. This is not to be confused with Meta Power, as that deals with powers that influence other powers, as this trope deals more in the meta-narrative.

While Brandon Rogers' characters can throw all the shade they want, they are still under his power.

While Brandon Rogers' characters can throw all the shade they want, they are still under his power.