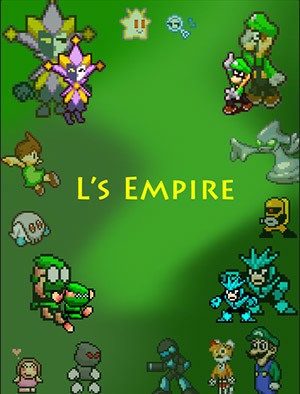 "Excellent, everything is mostly going somewhat according to my vague plan."
— Luigi showing he has no idea what he's doing
Advertisement:

is a webcomic hosted on Smack Jeeves written by Gamermaster and his younger brother SubrosianDimitri, that follows Luigi leaving Mario and then going off to form his own "Empire." To accomplish his vague goals, he enlists a gay clown, a narcissistic robot, and a mentally unstable green guy with a spear. Hilarity Ensues.

The comic updates 8:00 AM EST every day. Also the Authors have a habit of putting A LOT of information in their author comments, so a good chunk of the tropes are All There in the Manual.

Has nothing to do with that other L.