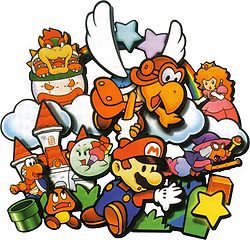 The first game in the Paper Mario series, titled Paper Mario (but called Paper Mario 64 by fans for the sake of differentiation), released for the Nintendo 64 in 2000 in Japan and 2001 in North America and Europe.

The game starts when Mario and Luigi get an invitation from Princess Peach to attend a party at her castle. When Mario goes to have some alone time with Peach, the ground suddenly shakes and the castle suddenly rises into space with all of the guests still inside. It turns out that Bowser built his castle underneath Peach's and rose both of them up into space in a giant Koopa Clown Car. Bowser then appears and reveals he had stolen an artifact called the Star Rod from Star Haven, which he uses to effortlessly defeat Mario and throw him out the window to the world below.

Mario later wakes up in Goomba Village, where he receives a telepathic message from a star to go to Shooting Star Summit. Once there, the star, named Eldstar, tells Mario to find the seven star spirits, who have been kidnapped by Bowser's forces all over the Mushroom Kingdom. Mario then sets off, meeting a quirky cast of partners along the way.

Paper Mario was re-released in 2007 on the Wii’s Virtual Console service, and later on the Wii U in 2015. In 2021, this game was the first title to join Nintendo Switch Online’s library of Nintendo 64 games after the service launched.

The first fight with Bowser is impossible to win thanks to Bowser having the invincibility-granting Star Rod.

The first fight with Bowser is impossible to win thanks to Bowser having the invincibility-granting Star Rod.