Mario's first partner throughout the entire series, Goombario is a small but highly intelligent young lad who knows something about everything. His main ability is his "Tattle" ability, which doesn't do much for you gameplay-wise, but which can provide advice to you and make HP bars for enemies you've used it on visible.

"I swear, I, Kooper, will follow you anywhere, even to the ends of the earth!"

Mario's second partner is Kooper, an adventurous Koopa. He idolizes the famous explorer Kolorado and wants to be just like him. He has the ability to fling his shell and come back like a boomerang — even across the air!

"See that? You see what I bring to the party, Mario?"

Mario's third partner is a fiery young Bob-omb named Bombette. After he saves her from imprisonment in the Koopa Bros. Fortress, she pledges to join him on his quest. She can blow things up to destroy rocks and cracked walls, among other things. What we'd like to know, though, is how she's still... actually, never mind.

This harried courier is Mario's fourth party member. He's a Paratroopa who uses his wings to help him deliver mail. He can carry Mario across short gaps, but he's also involved in a lengthy sidequest to nab one of the game's rarer badges.

"I swear on my own grave! Mario's innocent!"

Mario's fifth party member, Bow is a member of the Boo gentry who's unapologetic about scaring the living daylights out of people. She likes smacking people around with her fan and can make Mario briefly invisible and intangible, which is useful for avoiding enemy attacks. She kidnaps and holds the Star Spirit Skolar hostage, refusing to free him until Mario vanquishes Tubba Blubba.

"You're super great! You're the greatest great guy! I think you're the best!"

Mario's 6th party member is also his youngest. Mario rescues her from imprisonment in the Big Lantern Ghost's lantern in Shy Guy's Toy Box. She's a Sparky (specifically, the daughter of the original Li'l Sparky) and can light up, showing Mario hidden things. She also has the ability to attack people through their defense, making her incredibly useful in battle.

"Hmmm. Well, I've never heard of you before. You must be from far away or something."

Mario's 7th party member swings it right back around in terms of age — Sushie the Cheep-Cheep is getting up there, but she's still got it! She can swim, and helps ferry Mario across water. Her water-type attacks are also pretty useful when fiery baddies come a-knockin'.

"World peace, huh? Isn't that a bit melodramatic? Still, I must admit there's a certain manly charm to having such a noble purpose."

Mario's final party member is a Lakitu — and he prefers to go by Spike. He starts out as a member of Bowser's cronies, but joins Mario so that he can shape up for his girlfriend, Lakilulu. He can carry Mario across hazardous surfaces — and it also happens to be faster than walking speed. 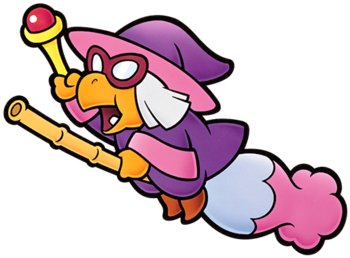 "Congratulations on your victory, Your Viciousness! That's why you're the King!"

An elderly female Magikoopa adorned in purple robes, Kammy Koopa is one of Bowser's top henchmen, seemingly on par with Kamek. Despite showing signs of senility, she is an adept magic user and strategist, at one point being described as "the brains behind Bowser". 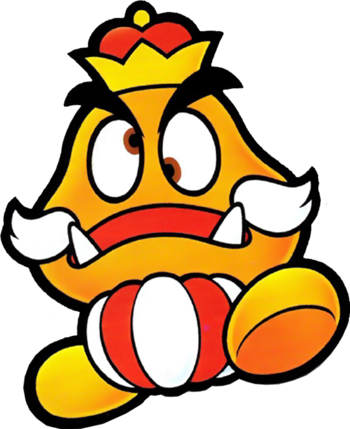 Once an ordinary Goomba, until he begged Bowser to use the Star Rod to make him a king, which also greatly increased his size. Along with his minions Red Goomba and Blue Goomba, he is the first boss Mario fights.

Rather noteworthy is the fact that unlike most characters, let alone things originating from the Paper Mario series in general, the Goomba King directly appears in a couple of other games in the franchise outside of the role-playing games, under the name of Goomboss.

The guardians of Eldstar and a quartet of masked Koopas that rely on teamwork to defeat their opponents. They start as the first major boss as the game, but return later for revenge... but are promptly defeated by a deranged Jr. Troopa. They look familiar... 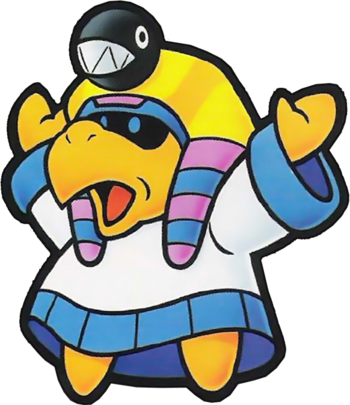 "You shouldn't mess with Tutankoopa, a faithful follower of King Bowser! Ooops... I mean... You shall regret this!"

The guardian of Mamar and a pharaoh Koopa that seems to have magical powers and control over several pet Chain Chomps. Hides in a hidden pyramid and tries to be intimidating, and when beaten, his Chomps turn on him. 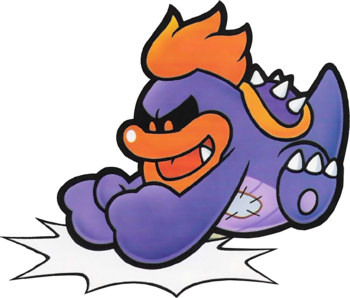 Originally the guardian of Skolar, until he fled his castle and was captured by Boos while making his way through Forever Forest. A giant Spike that eats Boos for snacks. Bowser made him unbeatable by removing his sentient heart, but once Tubba Blubba is reunited with it, he becomes a complete pushover. 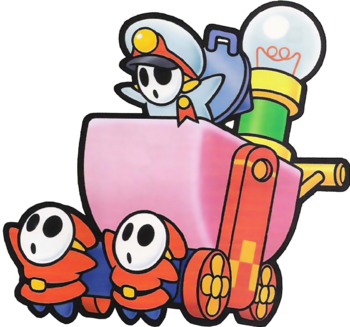 A white-cloaked Shy Guy and the leader of an army of bumbling Shy Guys, as well as the guardian of Muskular. While not much of a fighter himself, General Guy drives a large tank that delivers a powerful punch. 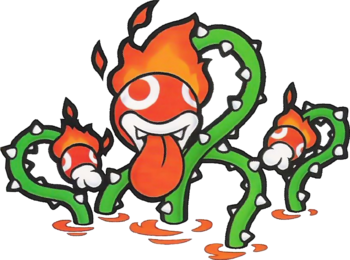 "WE MAKE THINGS HOT FOR YOU!"

The guardian of Misstar and a mutant Piranha Plant that is magically transformed into a multi-limbed, flaming monster. It lives in a raging volcano on an island of Yoshis. 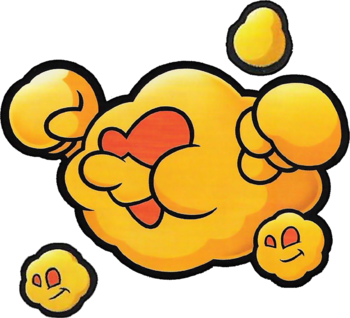 "You asked for it... Now you'll witness the full power of my storm!"

A giant Ruff Puff that is terrorizing Flower Fields and the guardian of Klevar. 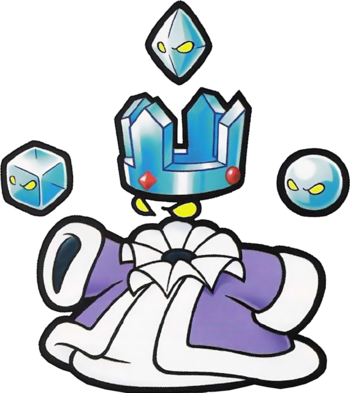 "First I shall defeat you, then I shall present Bowser with an iced Mario gift!"

The guardian of the seventh and final Star Spirit, Kalmar, and an invisible creature that is only seen due to the clothing he wears. Resides at a palace of ice and likes to make copies of himself when fighting.

A young Koopa that still wears his eggshell. He fancies himself a bully, but is easily beaten at the start of the game. He returns with a vengeance multiple times at various points in the game.

Head of the Toad Town dojo, a seemingly frail old Toad who is far stronger than he looks. 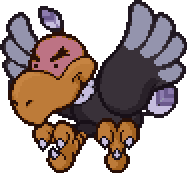 A large buzzard who lives on Mt. Rugged. He saw Mario on Bowser's "Wanted!" Poster, but when he encounters him, he isn't quite sure that it's him, so he asks him personally. Mario's answer determines whether or not he has to fight this large bird.

A black Shy Guy who guards a treasure chest in Shy Guy's Toy Box. He doesn't look like much, but he's actually quite powerful. 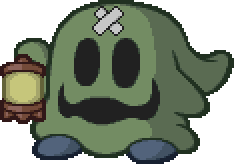 A boss fought in Shy Guy's Toy Box. He trapped Watt inside his lantern; defeating the Big Lantern Ghost allows Mario to free her. 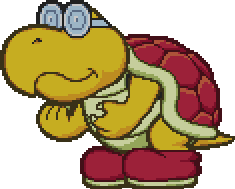 "Good doing business with you! Oh, the jingle of coins is so very beautiful."

A large Koopa Troopa who, after Chapter 5's completion, shows up on Pleasant Path and starts demanding 100-coin tolls from anyone who wishes to pass. 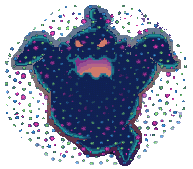 A monster encountered in Shiver Snowfield. It looks powerful, but it's actually a complete joke. Turns out Monstar is just a bunch of Star Kids in disguise who were trying to scare off intruders and didn't know that Mario was a good guy. 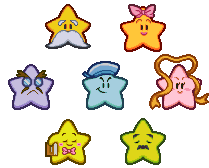 From left to right, top to bottom: Eldstar, Mamar, Skolar, Muskular, Misstar, Klevar, and Kalmar.
"In order to take the Star Rod back from Bowser... and save Princess Peach... we need your help..."

The Star Spirits made their debut in Paper Mario. They first were held captive by Bowser's followers after Bowser and Kammy stole the Star Rod and turned them into cards. They return in Mario Party 5 as the guardians of the Dream Depot. 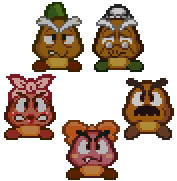 From left-right, top-bottom: Goompa, Gooma, Goomama, Goompapa, Goombaria.
A kindly family of Goombas who find Mario after his fall from Peach's Castle, who populate the quaint Goomba Village west of Toad Town. Little Goombaria is the one who discovers Mario, while old Goompa gives Mario his first hammer and Badge while showing some of the game's ropes, before recommending his grandson accompany his hero on the journey.
Twink

A tiny star who's only just ascended to Star Haven. When Peach wishes for Mario's safety, he comes down to help her, and becomes her "partner" for the rest of the game.

"You may not know this, but I cooked all the food for this big party. I made all of my most delicious dishes!♥ But... Oh dear... I got so into my cooking that I used up all my ingredients!"
Toad Town's legendary chef, this sweet Toad was one of many guests invited to Peach's Castle who thankfully made an escape. Her cooking is almost unrivalled, and she'll bake anything Mario brings to her with (usually) great results.
Koopa Koot

"Oh!!! How very kind of you! I guess the younger generation isn't so bad after all."

The elder of Koopa Village, who constantly asks for favours and is reputed as "a pretty self-centered old Koopa". He gives good rewards, some of the time.

"By the Stars, I'll risk my life for that treasure!!"

An adventurer, explorer and treasure hunter. He's Kooper's role model and spends much of his time looking for some new artifacts.

"Dear sir... Lady Bow is very, very, very important to us Boos. Please don't let her get in any dangerous situations."

The butler of Boo's Mansion, he's the one to request Mario's assistance. He's a proper Boo who's great at giving scares, but he's fretfully protective of Lady Bow.

Chet Rippo
A person who boosts Mario's stats...for a price and not just in money.
Rip Cheato
A salesman running his shop in Toad Town Tunnels.