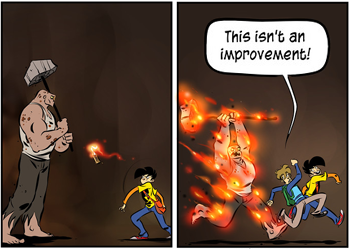 "Established wisdom for modern zombie hunters: The only thing worse than a horde of zombies is a horde of flaming zombies."
— The Zombie Survival Guide
Advertisement:

The evil twin of Man on Fire, Incendiary Exponent, and Out of the Inferno, this is where someone sets whatever is trying to kill them on fire... and it then continues to try and kill them. While on fire.

Sometimes it is just a delayed reaction and the fire will prove fatal, but that is little comfort considering it may prove fatal to the heroes first. Might also apply to Nuke 'em if the target is gigantic. Eldritch Abomination: Bad. Eldritch Abomination that gets nuked, and stands back up pissed off and blazing radioactive fire? Worse.

A standard form of Taking You with Me and Video Game Cruelty Punishment, many who are set alight become...well, hell bent on setting anyone and anything on fire as well.

After Django falls into magma, Sartana brings him back with some extra firepower.

After Django falls into magma, Sartana brings him back with some extra firepower.