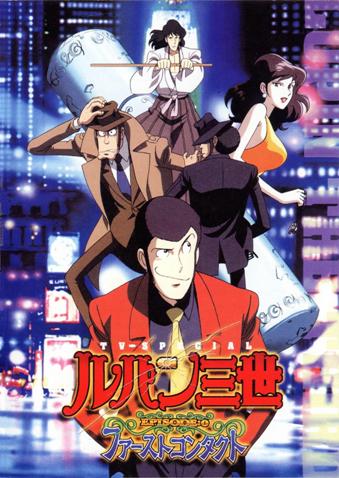 Lupin III: Episode 0: First Contact first aired on Japanese network NTV on July 26, 2002 and is the fourteenth of the Lupin III Yearly Specials. Directed by Minoru Ohara, it was created to celebrate the 30th anniversary of the Lupin III franchise on TV, as marked from the debut of the first series.

Years ago, he was in the employ of a mafia boss named Galvez. Galvez's most precious possession was a rare treasure from Japan, an indestructible metal case containing the instructions to a great treasure. Two rival thieves, Lupin and Brad, are after the treasure. But when tragedy strikes, Brad's girlfriend Fujiko takes up his cause in revenge. She, in turn, is being pursued by a dogged Japanese detective, Zenigata, for her crimes in his country. Meanwhile, a samurai named Goemon is searching for a lost sword that would be worthy of his skill, one that would also open Galvez's sealed case. As the plot thickens, all five characters are drawn together…

This special was extremely well received, especially by the (small in number but very dedicated) Western fans. After multiple entreaties by fans to Funimation failed, Discotek Media licensed and released it in 2009. It is notable for being the first Lupin III anime released on DVD in North America without a corresponding English dub.note  AnimEigo's short-lived release of Legend of the Gold of Babylon was the very first stateside Lupin III feature without a dub, but it was VHS only. Also, Discotek themselves had previously published the 1974 live-action film Strange Psychokinetic Strategy without any dub. There is, however, a DVD Commentary track from Fandom VIP Reed Nelson.