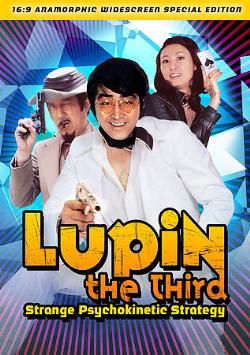 Lupin III: Strange Psychokinetic Strategy note Original title: (Rupan Sansei: Nenriki chin sakusen) was not just the first Live-Action Adaptation, but also the first Lupin III film ever made. It was released by Toho in theaters on August 3, 1974. Discotek managed to acquire the rights to license the movie in North America on DVD in 2006. Director Takashi Tsuboshima chose to make the first film an Origins Episode, instead of using the "Continuing adventures" theme that later anime movies would use. The Lupin III: Part 1 series was just getting syndicated now, and this film would tell the story of what happened before that series.

Lupin the Second, head of the world-wide criminal organization, the "Lupin Empire", is dead. Daisuke Jigen, last faithful member of the organization, has come to Japan to find the lost son of his boss, so that the boy can rebuild the fallen empire his ancestors created. Unfortunately for him, Lupin doesn't care about his father and grandfather's empire. He's too lazy to worry about creating anything like that. Jigen refuses to be dissuaded, and sticks next to his boss's son as much as he can. That's great luck for Lupin, as he's about to meet the most beautiful woman in his life, get attacked by assassins sent by an Italian mafia, and dodge several more schemes by the zealous Zenigata who's already trying to capture him.

That's the basic plot, which is ignored largely in favor of entertaining hijinks and slapstick comedy. Very similar to The Benny Hill Show.