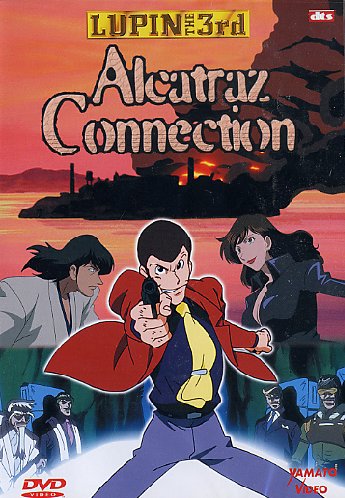 Lupin III: Alcatraz Connection is the thirteenth entry in the Lupin III Yearly Specials, and first aired on Japanese television on August 3rd, 2001. It was directed by Hideki Tonokatsu, who previously directed last year's Missed By a Dollar. As the first Lupin III TV-special of the 21st century, it was also the first to make use of digital animation instead of traditional ink-&-paint on cels.

Lupin and his pals pull a heist on Machine Gun Kelly, a casino cruise rumored to be a front for money-laundering by the Mafia, near the coast of San Francisco. After their heist is botched at the hands of Zenigata and his assistant Inspector Terry Crown, Lupin reveals to his comrades that he did steal something valuable from the cruise: computer data containing the coordinates of the Yankee Slade, a 19th-century carrier that sank with countless gold bars in tow after a heavy storm. Unfortunately, the wreckage is nearly 20,000 feet below the surface, and the coastal tides are too strong to reach the shipwreck with a conventional submarine. Whilst they try to figure out a solution, however, they are ambushed by mafia members, leading to Lupin being captured in the process. After he's saved by Jigen, they quickly learn that they have crossed paths with a criminal organization called Secret 7, who are somehow connected with the island Alcatraz, the Yankee Slade treasure, and a major political conspiracy that remained unsolved for decades.