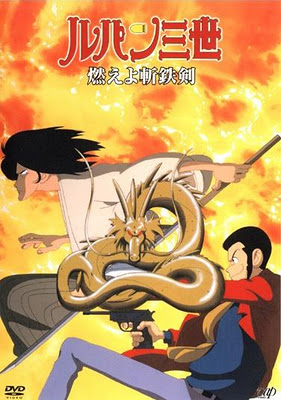 Lupin III: Dragon of Doomnote  Original title: 燃えよ斬鉄剣 (Moe yo Zantetsuken; Burn, Zantetsuken!), the sixth entry in the Lupin III Yearly Specials, first aired on Japanese television on July 29th, 1994. It was directed by Masaharu Okuwaki, who worked as a storyboard director on the Pink Jacket series, and went on to storyboard other specials in the franchise. It was dubbed into English and released on DVD in the USA by Funimation in 2002, and was re-released as part of the "First Haul" boxset in 2006.

Lupin has his mind set on a small golden dragon statue located in the remains of the sunken Titanic, a treasure that the Chinese crime lord Chin Chin Chow is also after. Once they have their hands on it, though, Goemon, putting honor before his allies, is determined to retrieve the statue from them, with help from his childhood friend Kikyo, to keep his family's honor intact, even if it means killing them both.

This special is noteworthy for being the last one where Yasuo Yamada played the role of the titular character before his death in 1995, after which he would be replaced by Kanichi Kurita from the next chronological entry onwards.note  Yamada's final-final turn as Lupin actually came in a Japanese commercial for Esso (a.k.a. Exxon), just a couple of months before he died.