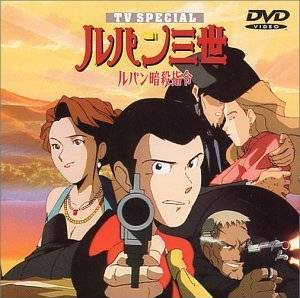 Lupin III: Voyage to Danger, originally released as Orders to Assassinate Lupin note ルパン暗殺指令 Rupan Ansatsu Shirei, is the fifth entry in the Lupin III Yearly Specials, a series of Made For TV Movies produced by TMS Entertainment and NTV. Released in 1994, it was the first special not to be directed by Osamu Dezaki; duties were instead handed over to Masaaki Osumi, who directed the first seven episodes of the first TV series before it was revamped to be Lighter and Softer in tone.

The inevitable has happened. After losing so much to Lupin, Zenigata has been taken off the Lupin case by ICPO. Feeling bad for the poor man, Lupin decides to help Zenigata on his latest case to capture a terrorist group known as Shot Shell, in hopes of him getting back on the case. To lure them out, Lupin gets his crew together to steal a Russian submarine. They also kidnap a scientist named Karen Korinsky to operate the sub, who has a mysterious connection to Jigen's past.

The crew better be careful, though. Keith Haydan, the new guy in charge of the Lupin case, is hot on their tail, and unlike Zenigata, he's more than happy to kill all of them.