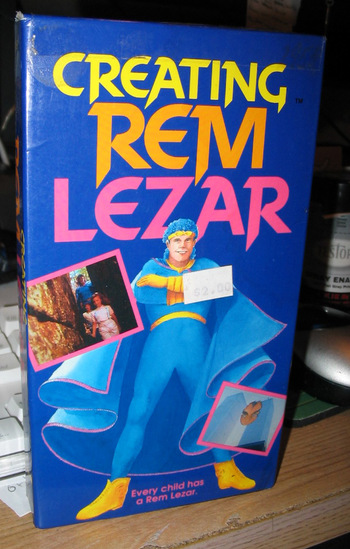 Two kids who get in trouble a lot for daydreaming in school have the same dream about the same imaginary friend, a Roman-themed superhero named Rem Lezar. The two meet, learn to get over their differences and discover what they have in common, and paint a mannequin like their dream hero. He comes to life and becomes fully human, and then takes them on a series of adventures, which involve a great deal of song and dance, as they try to find the Quixotic Medallion that will allow him to live longer than a day.

It's a direct-to-videotape musical from 1989, and it's 48 minutes long, half the length of the average movie. Was featured on an episode of Best of the Worst.

Not to be confused with the band R.E.M. or the Bleached Underpants OVA series Dream Hunter Rem.