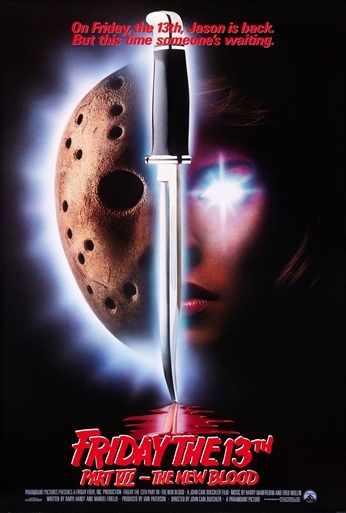 On Friday the 13th, Jason is back. But this time, someone's waiting.
— Tagline
Advertisement:

The seventh Friday the 13th film.

As a young girl, Tina Shepard accidentally killed her father by using psychic abilities she didn't know she had. The guilt over his death has haunted her for a decade. In the present day, Tina, her mother, and her latest doctor head back to Crystal Lake — where her father drowned — to work out her issues for good. Not too far away, a group of teens plan a surprise birthday party for one of their friends; one of these teens even meets and becomes smitten with Tina, which gives her a chance to experience some sense of normalcy.

But things turn sour when her doctor tries to incite Tina's telekinesis under the guise of psychiatric care. When Tina has an emotional outburst after one such session, her latent abilities resurrect Jason Voorhees, who had sunken to the bottom of Crystal Lake not long before Tina's father drowned. As the Crystal Lake Killer returns to doing what he does best, everyone around Tina calls her delusional when she says she saw him...but sooner or later, everyone finds out that her "delusions" are anything but.

This film marks the debut of Kane Hodder as Jason, who would play the role for the next three sequels and a video game (and become a fan favorite in the process).

The New Blood contains examples of the following tropes: