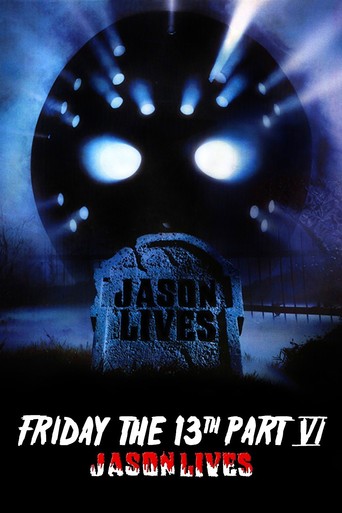 "Yeah, 'cause he's back, the man behind the mask!"
"I went to go cremate Jason but I fucked up!"
— Tommy Jarvis
Advertisement:

Jason Lives is the sixth film in the Friday the 13th film franchise.

Sick and tired of mass murderer Jason Voorhees haunting his dreams and memories, Tommy Jarvis decides to destroy the killer's remains to purge Jason from his mind. Tommy and his buddy Hawes drive to the Eternal Peace Cemetery in Crystal Lake (now known as Forest Green), dig up Jason's rotting corpse, and prepare to burn the remains — but after Tommy stabs Jason in the chest with a giant metal rod, the unexpected happens: two lightning bolts strike the corpse and bring Jason back to life.

While Jason terrorizes Forest Green on his way back "home", Tommy searches for another way to put an end to the nightmare once and for all.