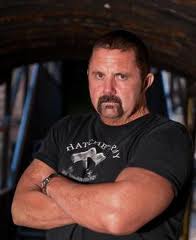 Kane Warren Hodder (born April 8, 1955 in Auburn, California) is a stuntman who also has done some acting roles, most famously in Friday the 13th films as Jason Voorhees.

He has notably stated he can vomit on command. He was also a guest investigator in Ghost Adventures.

Tropes invoked by the actor: