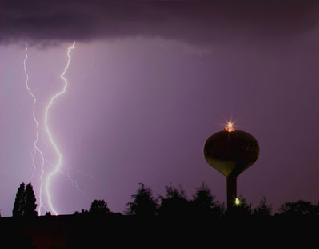 In Real Life, thunder is the sound caused by a lightning strike. It has a delay because sound travels slower than light, and so the farther away the lightning strikes, the longer it takes for the thunder to arrive.note  Every five seconds is approximately a one mile distance between you and the lighting bolt. If you do manage to hear thunder at the same time you see a lightning flash, it probably means that you're in the worst of the storm.

Not so in fiction. Here, lightning almost always arrives with the sound of thunder, no matter where the lightning is. This happens so often that it is remarkable when thunder does have a delay. Expect quite a few aversions to mention counting the seconds to see how far away the lightning struck, especially if the target audience is children.

Most writers, when they avert the trope, will generally include the counting to show the distance of the storm.

This is such a universally used trope that only subversions and aversions should be listed as examples.

Related to Dramatic Thunder and Thunder = Downpour. Falls under the Rule of Perception.