Series / McGee and Me! 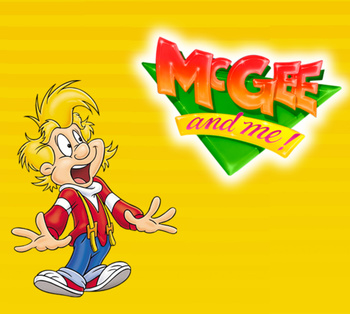 Pictured: McGee. Not Pictured: Me.
Advertisement:

McGee and Me! is a Christian direct-to-video and book series created by Ken C. Johnson and Bill Myers and produced by the American Christian advocacy group Focus on the Family, who also created Adventures in Odyssey.

The series follows the life of 11-year-old Nicholas Martin as he adjusts to life in a new neighborhood with help from his family and friends, learning life lessons along the way.

Oh, and his best friend is a six-inch-tall cartoon character of his creation: The eponymous McGee, who also frequently helps Nicholas with his problems (or at least tries to), often goes off on his own adventures (either within Nicholas's sketchpad or in the real world), or learns a lesson himself.

The series spanned a total of twelve episodes from 1989 to 1995. The first episode was aired on ABC in 1992 as a pilot for a potential broadcast run, but the network never picked it up. The series was also nominated for a handful of awards during its run, including one for "Outstanding Youth Mini-Video Series

McGee and Me! provides examples of: