Film / Do the Right Thing 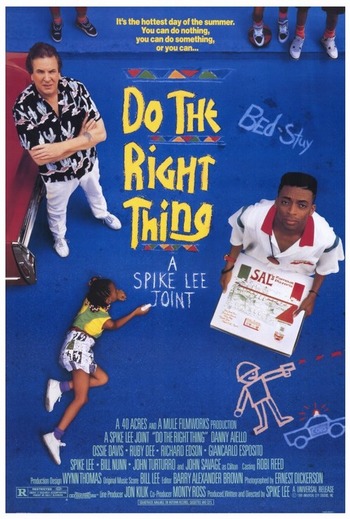 "Wake up! Wake up! Up you wake!"
— Mister Señor Love Daddy
Advertisement:

A 1989 Spike Lee joint about bigotry and racism. Often considered one of Lee's signature films, it's known as much for its content and ever-relevant themes as it is for its initial controversial reception among audiences and for being snubbed at the Oscars in favor of Driving Miss Daisy.

Mookie (Spike Lee) is a delivery man for Sal (Danny Aiello), the Italian-American owner of a pizza joint in Bedford-Stuyvesant, Brooklyn. One hot summer day, a friend of Mookie's, Buggin' Out (Giancarlo Esposito), notices that Sal's "Wall of Fame" has only photos of Italian celebrities. Irritated, Buggin' Out argues that Sal should put some black celebrities' pictures on the wall, since most of his customers — and most of the neighborhood's residents — are black; Sal, equally irritated, argues that it's his restaurant and he can decorate it how he likes.

It's a small argument over a minor issue. It shouldn't be a big deal. But today is the hottest day of the summer. And sooner or later, that unbearable heat is going to bring the simmering racial tension in this neighborhood to a violent and quite literal boiling point...

Always do the right thing.