Film / The Dorm That Dripped Blood 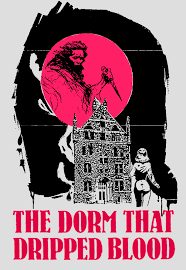 "...where the only thing you'll learn is how to die!"
— Tag Line
Advertisement:

The Dorm That Dripped Blood (a.k.a. Pranks and Death Dorm) is a 1982 Slasher Movie.

College students Joanne, Craig, Brian, and Patty are cleaning out a condemned dormitory while everyone else is on Christmas vacation. Unfortunately for them, a psychopathic killer is making the rounds, and is using a variety of tools to bump people off one by one. Who is responsible for the brutal murders?

The story behind The Dorm That Dripped Blood may be more interesting than the film itself. College students Stephen Carpenter and Jeffrey Obrow made it while still having classes at UCLA, hoping to use the film to get their foot in the door at Hollywood. They did what they admit was a shameless cash-in on what was popular at the time: slasher flicks.

The film is notable for a couple more reasons; first, it was the debut of Matthew Mungle, an effects artist who eventually won an Oscar for his work on Bram Stoker's Dracula. Secondly, Christopher Young, who has definitely moved onto bigger and better things since (though mostly still in the horror genre).

"The tropes that dripped blood":