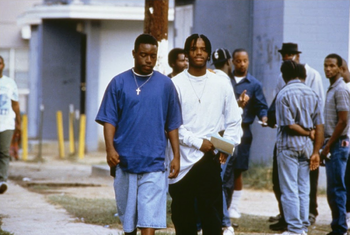 "One out of every ten black males will be forced to sit through at least one 'growing up in the hood' movie in their lifetime."
— Don't Be a Menace to South Central While Drinking Your Juice in the Hood parodying Boyz n the Hood
Advertisement:

In the late '80s and The '90s, a genre known as the "hood film" emerged in the US. The focus is on working-class Black or (less commonly) Latino life in American urban ghettoes (or "'hoods," being shorthand for an "urban neighborhood"). Common themes include gang violence, Police Brutality, institutional racism, Teen Pregnancy, Junkie Parents, and commonplace problems of growing up in poverty. Academic settings within said hood are usually poorly-financed and horribly-run Inner City Schools where a Cool or Stern Teacher is called to Save Our Students. Hip-Hop music and culture often feature heavily. Most, especially in the genre's early days, were made by up-and-coming Black filmmakers eager to see their stories told on the big screen, not unlike how the British Kitchen Sink Drama was crafted by upwardly-mobile men of working-class backgrounds; perhaps not surprisingly, one can find a number of similar tropes across the two genres.note Educating Rita, a British Kitchen Sink Drama, was even planned to get an American remake involving a Black woman from the ghetto trying to get an education.

The genre is also sometimes called the "urban crime" genre, but not all films focus on Gangbangers and other criminal activities.

A Sub-Trope of Gangster Fiction and Kitchen Sink Drama. Compare to Blaxploitation. Not to be confused with In the Hood, which is about hooded garments (though "hoodies" are not uncommon apparel here).