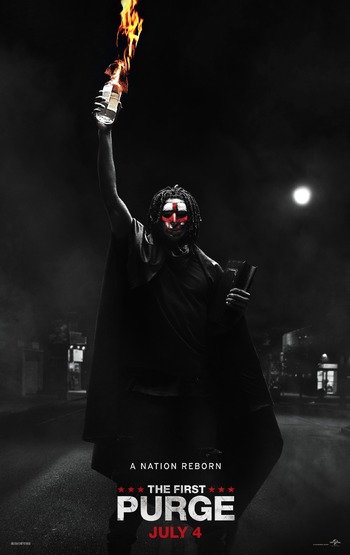 Every bloodbath has a beginning.
"What makes America great? The answer's simple, really. Americans make America great. You are the lifeblood of the nation and your rights as Americans must be safeguarded. There is only one solution to keep our country great - a new tradition. Participate today and nothing will make you prouder than when your boy looks up at you and says, 'Dad, I wanna purge too!'"
Advertisement:

The First Purge is a 2018 American social science fiction action horror film directed by Gerald McMurray and written by James DeMonaco. It is a prequel to The Purge, and the fourth entry in The Purge franchise. It has an entirely different cast from the previous three films, which include Y'Lan Noel, Lex Scott Davis, Joivan Wade, Luna Lauren Valez and Marisa Tomei. It was released on July 4, 2018.

To push the crime rate below one percent for the rest of the year, the New Founding Fathers of America (NFFA) test a sociological theory that vents aggression for one night in one isolated community. But when the violence of oppressors meets the rage of the marginalized, the contagion will explode from the trial-city borders and spread across the nation.

The First Purge contains examples of: