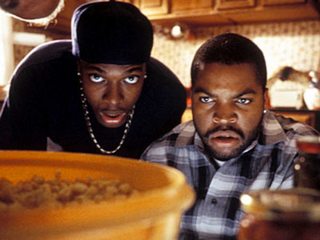 I know you don't smoke weed. I know this. But I'm gonna get you high today. 'Cause it's Friday, you ain't got no job, and you ain't got shit to do.
"And you know this, MAAAAAAAAN!!"
Advertisement:

Friday is a stoner comedy film created by Ice Cube in 1995 and directed by F. Gary Gray (his first film). Friday tells the story of Craig Jones (Ice Cube), a UPS worker that ends up getting fired on his day off as the film opens; as a result, Craig hangs around the porch of his house for pretty much the whole day. Craig's friend Smokey (Chris Tucker) joins him as the duo observes the other oddball characters in the neighborhood. Things take a drastic turn when Smokey is revealed to owe money to a drug dealer named Big Worm (Faizon Love), who gives Smokey until nightfall to pay him for the weed he was supposed to sell (Smokey ended up smoking it instead). Craig ends up getting pulled into the mess, and the duo frantically try to think of a way to earn the money before the deadline.

A moderate success when it was released, Friday earned $28,215,918 in the international market; most of it came from the United States, where it was the 62nd most successful film of its year.

The film features a lot of well-known African-American actors who were relatively minor back when the movie was released — it promoted Chris Tucker to star status. When Ice Cube decided to make a sequel six years later, Tucker declined to reprise his role; newfound religious beliefs made him want to shy away from playing a drug addict, which is why he wasn't present in the sequel films. (Many fans argue that the sequels suffered in quality as a result.)

Next Friday, released in 2000, picks up a few days after the first. Deebo (Tommy "Tiny" Lister), the resident bully that Craig defeated in the first movie, escapes from prison looking for vengeance. Craig's father (John Witherspoon) decides to hide Craig at his brother Elroy's (Don "D.C." Curry) house in Rancho Cucamonga, California. Craig meets his cousin Day-Day (Mike Epps), then Hilarity Ensues as the duo bums around the neighborhood — unaware that Deebo is tracking Craig down. General consensus of Next Friday is that it's slightly on par with the first film, though nowhere near as good.

Friday After Next, the third (and so far final) film in the franchise, was released in 2002; it is set at Christmas time rather than summer. Craig and Day-Day are living together as roommates in a ramshackle apartment, and the night before Christmas Eve, they're robbed by a burglar — dressed as Santa — who makes off with their presents as well as their rent money. The next day, Craig and Day-Day's landlady breathes down their necks about not having the rent money, threatening to send her son Damon (Terry Crews) — who just got out of prison — to beat the rent out of them if they don't pay up. The duo spend the film working as strip mall security guards, once again observing the colorful residents while getting into hijinks and attempting to find the crooked Santa that robbed them. Friday After Next is often viewed as vastly inferior to the previous two films, although it does have its moments (and its fans).

15 years after ...After Next, it was revealed by John Witherspoon that a fourth film was in the works, titled Last Friday. Though at the current, nothing more is known about it. With John and Tiny's deaths in 2019 and 2020, respectively, likely throwing a wrench into things as well.

This film is not related to the Robert A. Heinlein novel or the Fountain of Memes song "Friday" by Rebecca Black (though someone has made that connection

General
Friday
Next Friday
Friday After Next